Ten years after the horrific murders at Freddy Fazbear's Pizza that ripped their town apart, Charlie, whose father owned the restaurant, and her childhood friends reunite on the anniversary of the tragedy and find themselves at the old pizza place which had been locked up and abandoned for years. After they discover a way inside, they realize that things are not as they used to be. The four adult-sized animatronic mascots that once entertained patrons have changed. They now have a dark secret . . . and a murderous agenda.

In 1995, 17-year-old Charlie returns to her childhood home of Hurricane, Utah to attend the launch of a scholarship dedicated to her school friend Michael Brooks, who went missing ten years earlier. She reunites with her childhood friends Jessica, John, and Carlton, and they decide to revisit the place where Michael died: Freddy Fazbear's Pizza, a family restaurant Charlie's father once owned.

An incomplete shopping mall has been built in the restaurant's place, but upon further investigation the friends discover the restaurant is still standing, and the mall has been built around it. Breaking in, they explore the abandoned restaurant and find that its animatronic mascot characters - Freddy Fazbear, Bonnie the Bunny and Chica the Chicken, which were built by Charlie's father - have been left behind.

The next day, Charlie and her friends attend the scholarship's launch ceremony at their old school, where Michael's parents give a speech about him. Afterwards, John confesses to Charlie that he remembers seeing a strange person in a yellow Freddy costume at Freddy Fazbear's Pizza on the day of Michael's death, and he now suspects this person was Michael's killer.

That night, Charlie, Jessica, John, and Carlton return to the restaurant, accompanied by their friends Lamar, Marla, and her 11-year-old brother Jason. They discover the still-functioning control panel which makes the robots move, and Charlie finds a fourth robot - Foxy the Pirate Fox - which cuts her arm with its hook. The next morning, haunted by recent events, Charlie tells John that before moving to Hurricane her father owned another restaurant called Fredbear's Family Diner, which featured two performing robots, yellow versions of Freddy Fazbear and Bonnie the Bunny.

John drives Charlie to the abandoned diner in New Harmony, Utah, and she remembers the day her brother Sammy was abducted by someone in a Bonnie costume, which led to the diner going out of business and Charlie's parents divorcing. She suspects that Sammy's abduction and Michael's murder are connected. That evening, the friends go to Freddy Fazbear's Pizza again, but are caught by the mall's security guard Dave, who threatens to call the police.

Charlie offers to let Dave explore the restaurant with them, and he accepts. Inside, the friends play with the control panel, and while they are distracted Dave retrieves a Spring Bonnie costume from a closet and abducts Carlton, which Jason witnesses. The friends flee the restaurant and fetch Police Officer Dunn, only to find that the restaurant's door has been chained up while they were gone.

Police Chief Clay Burke - Carlton's father - does not believe their story, and assumes Carlton is playing a prank. Charlie later talks with John about her father; he closed the restaurant and committed suicide after Michael was murdered, leading many people in the town to suspect he was the killer.

Officer Dunn returns to the mall the next day to search the restaurant, but is attacked and killed by Dave. Charlie and John go to a library to research the history of Fredbear's Family Diner, and find an old newspaper article about Sammy's kidnapping with a photograph of Dave, who the newspaper identifies as the diner's co-owner.

In the restaurant, Dave has Carlton trapped in one of the costumes, and explains that some of them can convert into robots through a series of spring-loaded mechanisms called "spring locks". If these locks trigger while someone is wearing the costume, the metal components will crush the wearer to death. Dave's true identity is William Afton; the co-owner of both restaurants. He is a deranged psychopath responsible for the deaths of Sammy, Michael, and four other children.

Jason runs off, intending to rescue Carlton, and Charlie, John, Lamar, Jessica, and Marla break into the restaurant to find him. Finding Carlton, Charlie undoes the spring locks and frees him from the costume. As they search for a way out, the four robots come to life and pursue them through the restaurant.

William reveals that the robots are possessed by the vengeful ghosts of his victims, and boasts that they will hunt down and kill any intruders. The group tries to hide in a party room, but all four robots corner them. However, they are halted by the arrival of a fifth robot, the Golden Freddy from Fredbear's Family Diner, which Charlie realizes is possessed by Michael's ghost.

The yellow Freddy allows them to leave, and Chief Burke arrives to search for the missing Officer Dunn. William attacks in the Spring Bonnie's costume, but Charlie activates its spring locks, killing him. As the robots drag William's corpse away, Chief Burke escorts everyone out of the mall. The friends go their separate ways, and before leaving Hurricane, Charlie visits her father's grave, remembering a happy day she had with him when she was a child.

The book spent four weeks at #1 on The New York Times bestseller list in in Young Adult Paperbacks.

There are some positive reception about the book itself, however, after receiving some negative reviews from fans, with claims of the book's lore conflicting with that of the games' lore, Cawthon replied that:

The Brazilian Portuguese cover of the Silver Eyes. 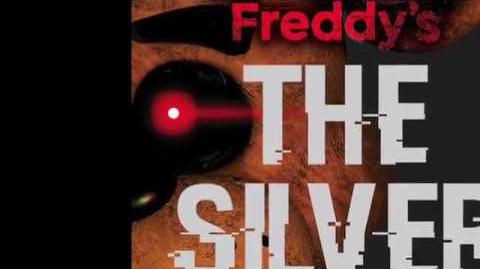 New Turkish Cover
Add a photo to this gallery
Retrieved from "https://fnaf-the-novel.fandom.com/wiki/Five_Nights_at_Freddy%27s:_The_Silver_Eyes?oldid=7005"
Community content is available under CC-BY-SA unless otherwise noted.